August 23, 2012
The more time goes by, the more remarkable I find it that there is so much more work to do on this composition.  Even some of the sections I considered relatively "completed," as I give it time and listen to it later on I get to approach it with a more critical ear (instead of, as Stephen King comments in his memoirs "On Writing,") as my baby.
The beginning section to me still seems pretty complete, although the fanfare's return I am hoping to alter in such a way to give it familiarity and yet variety at the same time, so that the listener (if they are as musically nerdy as I can be at times) will think:  "Oh, this is that fanfare motive from before, only it has been altered so the rhythm is doubled but with diminution!" If they are not as nerdy as me, they might just think:  "Oh, that's a cool new way to do that thing I heard before!"
The "Come Follow Me" section seems to need a few things to give it a more rich and a full sound at places, though I would say that this section is so far the most complete.
The "Sunset" section needs some considerable work to make it feel like its own section.  Namely, the material at the beginning could be extended to include some introductions of themes for later on in the piece with more stillness punctuated by small moments of beautiful melody.  I was thinking of this or perhaps introducing some new melodies or some of the later melodies but with an almost static feel to it to give the introduction of this section a more erie feel.
I also felt that this section went a bit too abruptly into the "Anger/Anxiety" section.

The "Anger/Anxiety" section is thus far still only partially written.  I do feel that some of the rhythmic devices I used at the beginning could be changed, and in general things here lengthened out.  This is kind of the highlight for this piece, to me, as it is what I feel can be a metaphor for life:  waiting upon the Lord for quite a while in difficult times before we are given great blessings:  "For after much tribulation come the blessings." (D&C 58:4).

The final section of release is something I'd like to start fleshing and sketching out it my mind, but might be in the more distant future.

Ooh! Ooh!  I just realized I could probably put some pictures of a little of what I've got so far on the Tone Poem!! Tee hee hee! 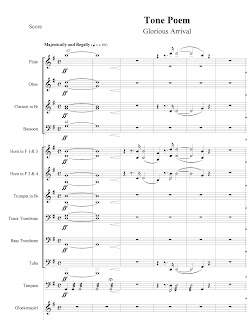 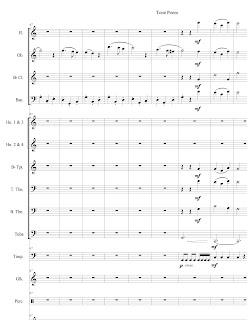 All of the page didn't quite get captured in the image, but nevertheless, I just think it's so cool looking at sheet music.  Especially when it's something that you've created yourself.  :)
Updates on Compositions