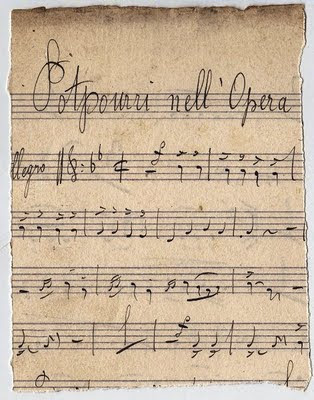 Having lacked time and energy, my plan to weekly spend time writing at least part of something fun as a warm-up to stretch my composing abilities has suffered considerably.  However, things have somewhat settled down and I've been able to do some composing and have a new short snippet to post, and here it is:

My goal with this was two-fold:
1) Write something in a compound meter (something which I haven't used quite as often).  In this case, I used 6/8

2) Write something that is happy, fun, and light-hearted (something I also haven't done as often, at least lately)

The result I felt was quite pleasing.  What I tried to do to add to that light-heartedness was to make the tempo very jaunty and almost dance-like.  I also used a lot of chromatic non-harmonic tones to help add to the almost silly feeling.   I originally had the melody in the Viola (partly from personal bias, partly from necessity), but felt that brass could more effectively portray that silly and party-like feeling I wanted.  Trombone was used at first, which was very effective except that the notes were all in the upper range of the trombone, and at that tempo, I felt the trombonist would be displeased with me.  French Horn would be preferable for range but would be too regal and would lack a certain pungence of tone quality that I could achieve with other brass.  I finally settled on trumpet, which would have the tone quality I needed and only have a few notes in the extremities of its range.

After listening to the melody in the trumpet, I also realized that there was an empty quality to the melody, and I put a harmony in the Violins with similar chromatic non-harmonic tones.  The effect was very pleasing and added to that fun feeling I was going for.  Finally, I just had to add a cute little pizzicato in the strings for that last little flair of fun.

This exercise has brought forward a question that's been at the back of my mind for a long time:  what makes the mood of a composition?  How did I know that the faster tempo would not make my listener agitated and anxious?  How would I go about changing this to make it sound more agitated and fearful and less fun?

I've come up with some conclusions:  the rhythms that we use can incite certain feelings, the harmonies and their voicing, the tempo, and I'm sure others.  For example, in the background of Sabre Dance and the theme from Pee Wee's Big Adventure, their is a constant syncopated rhythm that adds to the agitation.  There are also a lot of dissonances in the harmonies and the melody which add to our feeling of uncertainty and discomfort.  I'm wondering what the psychological background is behind these different compositional ideas and how we could codify them?  I will write more on some of these ideas in the future, as to me it is fascinating to think about.
Blog Updates How to write music New Compositions Streaming Music Updates on Compositions Weekly Warm-Up