March 08, 2014
As promised, here's a little bit about some changes I've made on the lyrical movement of my recent piano sonata.  To start off, here's the most recent update on what it sounds like:

Bear in mind, this is still a very rough version of this piano sonata.  I've yet to figure out a few rough spots in the minor section and some overall structural concerns I've had.


I've been spending most of my composing time focusing on this sonata, and some recent changes I made have made me wonder about why a composer changes things that sound okay, and how this refining process can take an okay composition and turn it into a better composition, and - hopeful - can even change it into a masterpiece.
Being a perfectionist, I find I spend a lot of my time (more at times than I like) writing and re-writing sections that at least earlier I felt worked really well already.  This raises a few questions in my mind about composing in general:
-What makes one note better than another?
-What makes one chord choice better than another?
-What makes one form work better than another?
While I certainly don't have all of the answers to these questions, I do know that the answer to any such questions comes down to the most important principles in art:  how does this piece of art, this performance, this music, etc. make me feel? 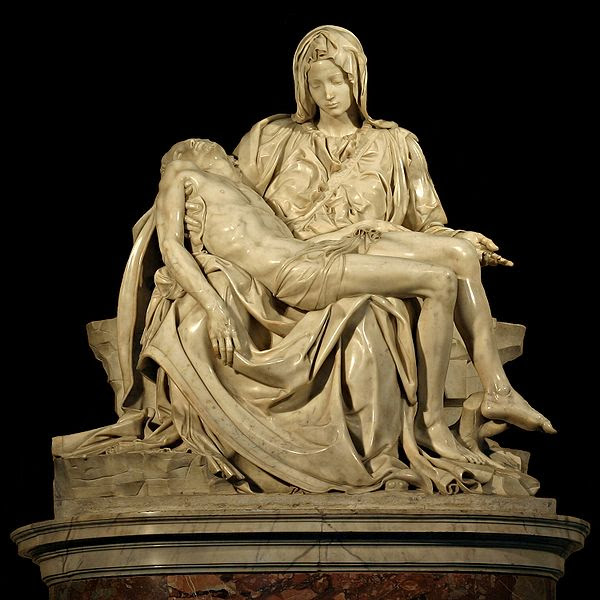 My professor, Brother R. Kevin Call, often talked to me in lessons (and I now use the same analogy with my students quite often) about Pietà, a sculpture by Michelangelo that would sit on his desk.  It's a sculpture of Christ being held by his mother, Mary.  Looking at the amazing detail in this such as draping cloth, muscle definition, and follicles of hair, it's hard to imagine that this is a sculpture made out of marble.  What it takes to make this is really remarkable, but is what every goes into all great art and even our own individual lives.
You first take a big chunk of marble, and you chip away at the big pieces to get the general shape.  Then, you take a chisel and start to hammer out some of the details.  You keep going smaller and smaller until you get to the point where you are just buffing out the edges.  The final result is a beautiful statue that makes you feel amazing:  I am awestruck looking at the amazing artwork of Michelangelo and other greater painters and sculptors.

What does this mean as a composer?  You start out with a general idea for a piece of music, whatever concept that may be, and you get to work chipping away at it, developing melodies, rhythms, harmonies, and ideas that you feel will work for it.  You start to refine it as you're going along, making all of the elements match up to what your overall concept for the piece is.  Sometimes, as you chip away, you realize that the concept has changed as well, and you realize what the piece was really about all of the time.  In the end, the feeling that you have when you listen to the piece should be the guide as to what needs to change and how.

As an example, I started out the second movement of my piano sonata like this: 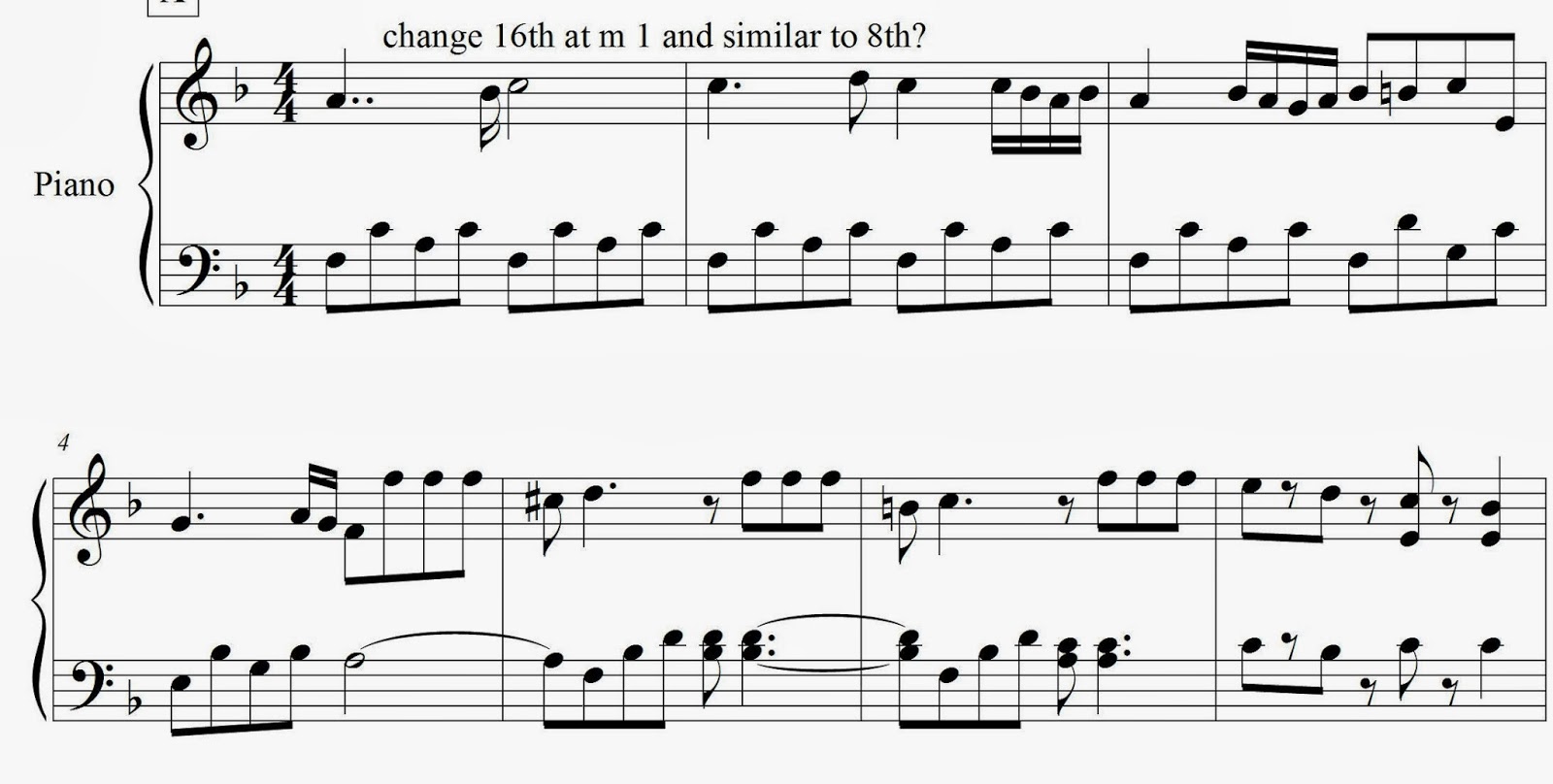 It sounds pretty good overall, a nice simple melody and accompaniment, kind of sweet sounding.  The more I continued writing this style and feel, the more I felt uneasy about it though.  One afternoon, I realized what the problem was.  This 2nd movement is not written in isolation, but is coming directly after the 1st, and as such needs to feel as if it flows (by the way, you can listen to this and other compositions in my Composition List).  Listen to the end of the 1st Movement:


Notice the weightiness here?  What I realized was not quite right with my 2nd movement was that it didn't have the gravity of what I needed right after the 1st.  I also realized what I wanted the piece in general to portray - a sense of mourning and deep sorrow - was not going to be portrayed by a light and "sweet" sound.  So, I changed things around a little and got this: 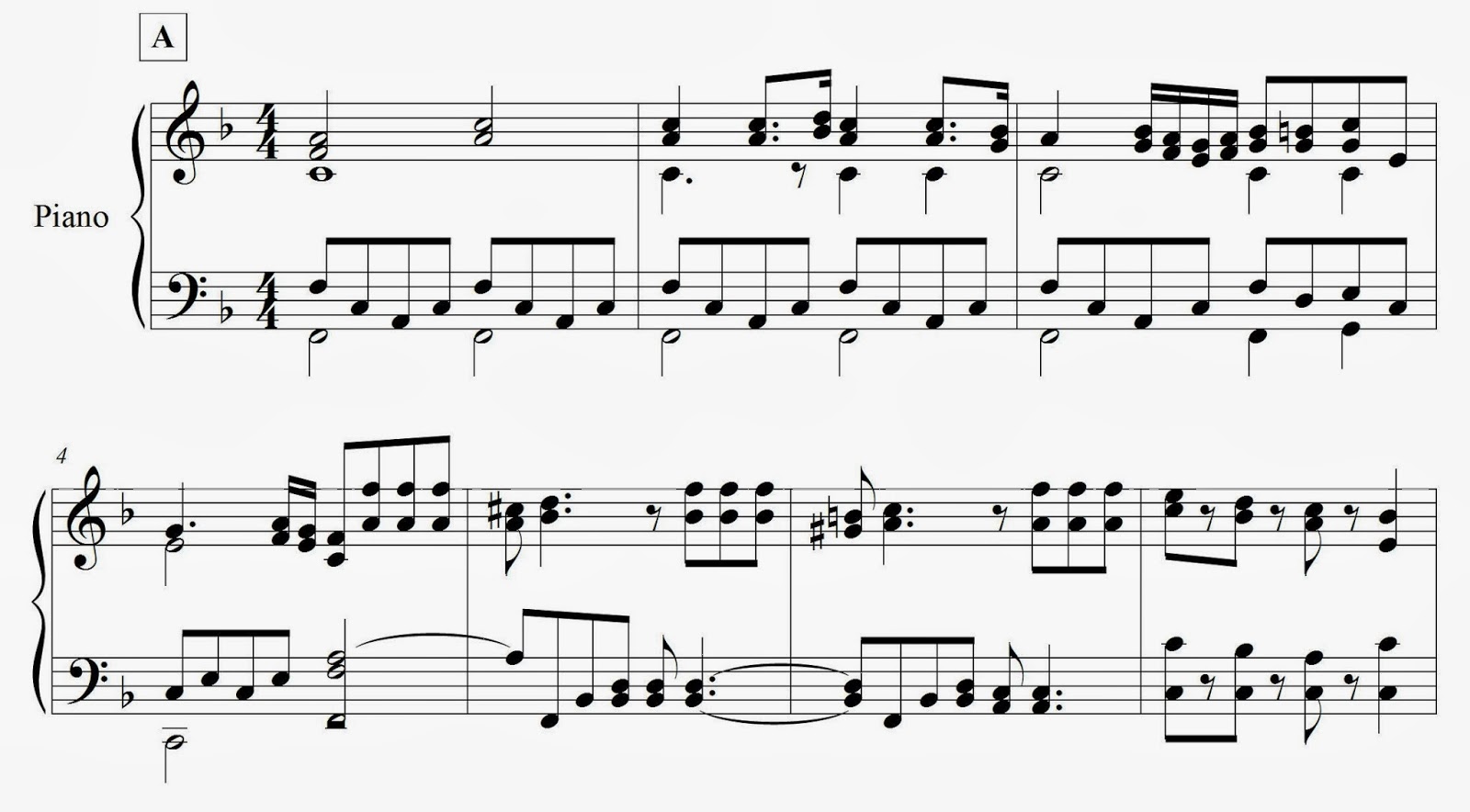 Quite a different sound from what I had before, although with the same basic melody, rhythms, and harmonic progression, but with some significant differences.  First off, I moved the left hand down an octave and added the extra F an octave higher.  The result sounds fuller and richer.  In addition, the C, continually bringing out the SOL and hinting at the V chord in measure 4 also adds richness to the harmony.
Secondly, I added some thirds in the melody to help even out the texture.  When I changed the octave in the left hand, the melody seemed very empty.  When I added the thirds in the melody, it filled out nicely and helped give a really neat richness.
Thirdly, I slowed down the tempo just slightly.  The difference in the tempo was only 5 clicks, from 65 to 60, but the difference was amazing:  it felt more like a grief stricken soul receiving much needed solitude and respite rather than like someone taking a light-hearted stroll.
The last change was a minor one:  I changed some rhythmic things in the melody.  I threw out the 16th note in measure 1 and added the dotted 8th and 16th figure in measure 2.  At the slower tempo, the 16th in measure one felt out of place at the beginning (though I bring it back a little later when this first theme returns).  In addition, the original dotted quarter and 8th was too slow at 60 bpm, and I felt the new figure let us feel like we were still moving. 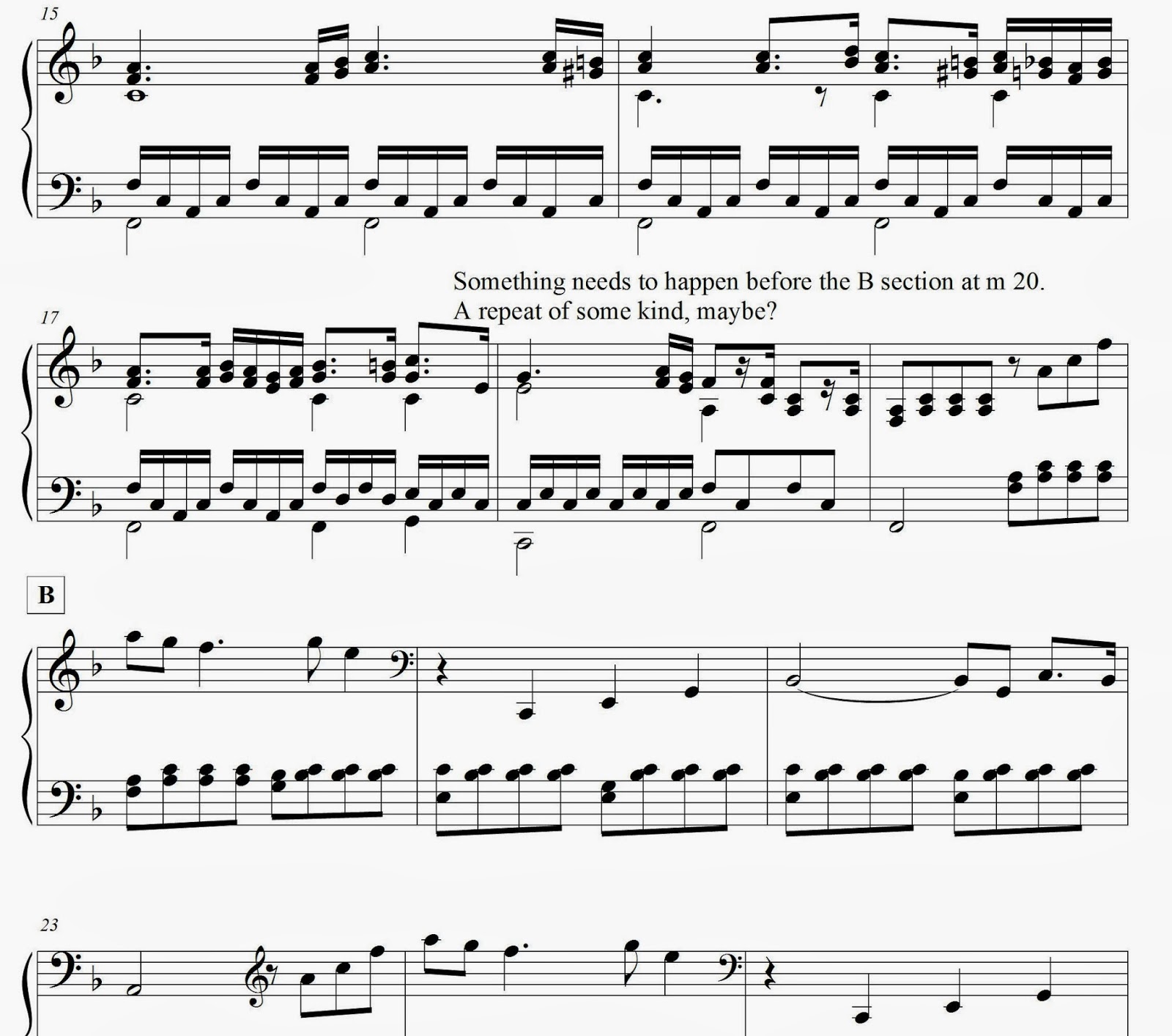 Other major changes from the old version include adding 16th notes in the left hand at the third return of the main theme to help it feel new and fresh when we hear it for the third time.  Beforehand, I had simply used some changed rhythms in the melody, but this was not enough and the main theme felt stagnant.  I also shortened the playful B theme which originally repeated itself with rhythmic contrasts the 2nd time through.  As this playful theme was not the central focus of the beginning section, I felt that repeating it was placing too much emphasis on it.  It was meant to be more of just brief reminiscences, like the grief-stricken remembering the wonderful and happy times (and maybe even silly times) with those whom they've lost.


While not an in-depth look at all of the changes I made to this movement, I hope this gives an idea of what kind of thought goes into the composition process and how a piece can evolve, change, and to take shape.  Just like creating a statue - and in becoming better people and more like Christ - composing involves more and more attention to smaller and smaller details, refining and perfecting until the final product is finished.
How to write music New Compositions Updates on Compositions